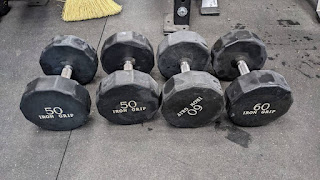 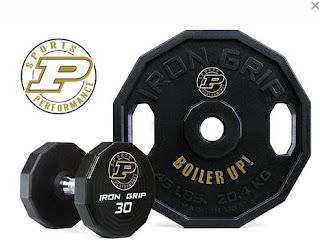 Custom Engraving
So a pair of Iron Grips finally showed up on Craigslist.  The real kicker is that I just sold 50# and 65# for $300.  I hate to go back under for $275.  I have been wanting Iron Grip dumbbells for a while.  These go for $5/lb new and are $3/lb on the secondary market.  These just showed up for $275 or $1.25/lb which is a fair price and I will likely have to pick them up.  Worst case scenario, I sell the 60's and keep the 50's.
I ended up contacting the seller who happened to be someone I have met before when he was selling Pro Style dumbbells for around $1/lb.  They went from 15-45? and were in reasonable condition, but the handles were rusty.  This does not affect performance, but I opted against.  He has a constant stream of listings on Craigslist and Facebook Marketplace, but the items I am interested in are priced at a high premium.
I have been wanting Iron Grips for a while now.  I like the integrated straight handle 12 sided anti-roll design.  I like that they are Made in the USA.  Iron Grip was founded in 1993 and launched dumbbells in 1997.  They launched a new urethane free weight line in 2010.  They can be found in commercial facilities, university and pro teams, corporate gyms and military installations.  While I would love to have a set labeled "Team Gupta" strength and conditioning, these will work out great.  The ones I purchased were the original design and the urethane has a softer feel than the current line.
They are not rare by any means, but they are hard to come by at a reasonable price.  I often see plates and dumbbells at $2+/lb.  The 12 sided plates are great for anything except deadlifting or other movements from the ground.  They are easy to manage and look nice.
I will be using these primarily for Rx Crossfit WOD's.  The 50# York Dumbbell that I have will be relegated to my strength "museum" or may be used for trades in the future.
Posted by Steve Gupta at 2:34 PM