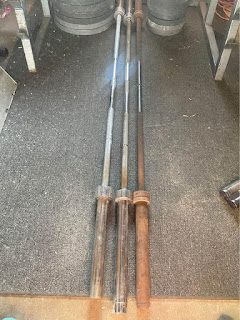 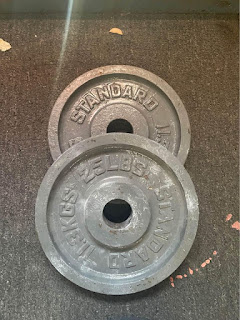 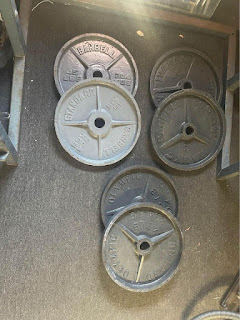 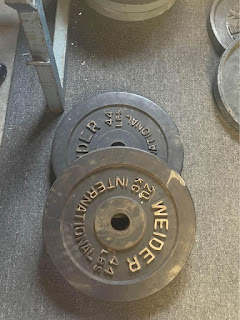 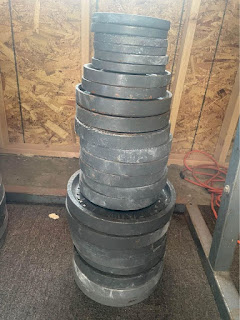 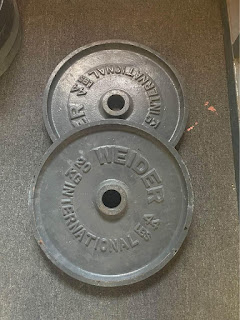 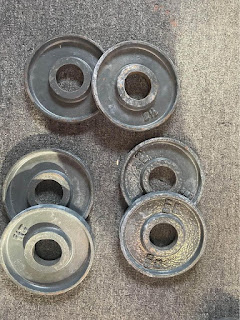 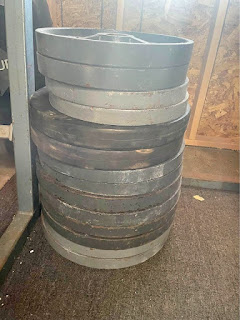 First come, first serve, no holds, 50 cents/pound.  I reached out to Sean about an hour after posting and got there an hour later and scrounged up a nice pair of Billard deep dish 45s (looks like skinny "O" not Taiwan stamped and a pair of USA deep dish 10s.  They have been painted and there is some rust, but as far as I am concerned, $55 well spent.  There was a pair of Ivanko 25s that I nearly picked up as well, but I am not ready to start that set.  I also passed on some Weider International bumper plates.
Everything except the rack sold within an hour of me stopping in.  If I were a flipper, I might have tried to buy for 50 cents/pound and sell for $0.75 to $1.00 per pound, but I have not been interested in that.
Lots of other good stuff too including a large set of Ivanko pro style dumbbells for $400 and a 5-50 set of Rep straight handle dumbbells for $300 ($0.55/pound).  The Rep dumbbells were pending within hours.
The Rep dumbbells were scooped up by Brian Tetreault and relisted for $800.  $1.50/lb is certainly reasonable and I do like the straight handles.  Even if he ends up letting them go for $600 it is still a nice mini-investment to flip gym equipment.
The Ivankos ended up being a full set from 5-100 missing a 65# db and a bent handle on one of the 70#.  I know this because I saw the flip post from Seth Walker with much nicer pictures and a listed price of $2600.  2100 (full set) - 65 db = 2035# of weight at $0.20/lb and Ivanko are a premium brand.  Even if he ends up dumping them at $0.50/lb that is still a great flip of $600.  He should be able to get somewhere between $1500 and $2000 for the set. 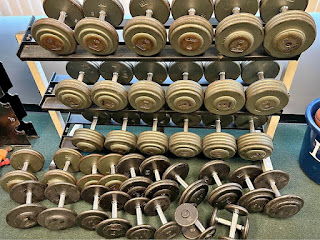 Email ThisBlogThis!Share to TwitterShare to FacebookShare to Pinterest
Labels: vintage 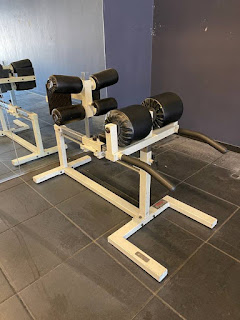 This was originally listed at $100 and then was re-listed at $50.  I am tempted to try to make room for a glute ham developer.
For reference these retail for $500-$600.  The cheapest GHDs I have seen are in the $250ish price range.  They are a unique piece of equipment.
I bought a GHD, used it occasionally and sold it due to the large foot print.
Listed 1/31/2023 near East Dry Creek Road and South Quebec Street
Posted by Steve Gupta at 7:12 AM No comments:

Sunday, January 29, 2023
Basement Gym
1100
Chipper
For Time:
100 air squats
80 crunches
60 alt lunges
40 push-ups
20 burpees
40 push-ups
60 alt lunges
80 crunches
100 air squats
This was a brutal grinder that took me 36:20.  It started off tedious but steady.  The ladder back up was a mental win as I pushed through "caps" at 20 and 30 minutes to finish the workout.
Programming from @thetinyapartmentwod on Instagram
Posted by Steve Gupta at 7:28 PM No comments: