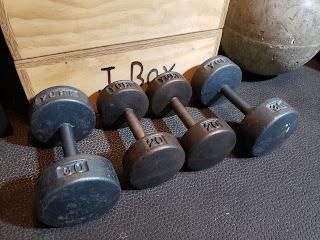 30# metallic blue next to 20# black
I came across a listing for "York 30 Lb. Dumbels" that although an hour away was too intriguing to pass up.  I say intriguing because I haven't spotted too much York equipment for sale.  I contacted the seller who listed them on yesterday and they were still available and could be picked up at her house.  They were used by her boys but have sat unused for the last 5 years.  I was actually taken aback when I saw that they were blue, but bought them anyway.  The original pictures below did not raise any eyebrows for me. 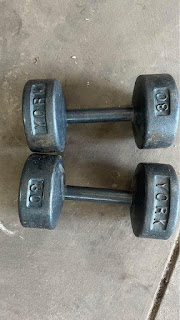 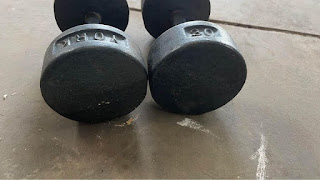 original listing picture
From Hugo Teufel's article, "York also painted their plates and roundhead dumbbells a metallic blue for sale in big box sporting goods stores, during the 80's and 90's. For some reason, even today these weights are often seen with the original stickers on them."
The Vintage York Barbell Owners group typically mentions the stickers from "Champs" sporting goods.  They are uncommon, but not rare by any means.  Smalls through hundred pounders have been catalogued.  This little history gem makes them even more interesting to me and a nice addition to my burgeoning collection.
Posted by Steve Gupta at 10:42 PM